An overview of the origins, most common causes, symptoms and treatment of skier's thumb.

What is Skier's Thumb?

Skier's thumb is an injury to the radial/ulnar collateral ligaments in the metacarpophalangeal joint of the thumb; that is to say, it is an injury to the connective tissue in the joint at the base of the thumb, where the thumb meets the hand. These ligaments are located near the part of the hand which is between the thumb and the index finger. Skier's thumb is often the result of a sporting injury. While it is true that all digits in the hand can be subject to a torn ligament, this type of injury is most common in the thumb. It occurs when the thumb is splayed out from the rest of the hand and is overstretched as a result.

As the name suggests, skiers are most commonly affected. This is because skier's thumb is often the result of the skier falling down while still holding their ski poles. It can, however, also be the result of an accident during other sports (such as ball sports, fighting sports or gymnastics) or even an accident in everyday life.

Skier's thumb is mostly caused by a fall or by external pressure on the thumb when it is splayed out from the rest of the hand. The result is that the radial/ulnar collateral ligaments can be partially or completely torn. The ligaments can even be torn away from the bone in some cases.

There are varying degrees of injury in Skier's Thumb:

There is also a fifth type, namely the Stener Lesion. This is a specific type of skier's thumb in which the thumb and ligaments therein are unlikely to heal without surgical intervention because the ligaments are torn in such a way that they cannot heal back together again. Treatment of skier's thumb depends on the severity of the injury.

It is recommended that if you suspect that you may be suffering from skier's thumb, you should consult a medical specialist as quickly as possible; this can be an orthopaedist, a sports medic, or a trauma surgeon.

Until such time, general first aid should be adhered to: apply a cold compress to the thumb, avoid movement of the thumb, and avoid any exertion or pressure on the thumb itself.

If an injury to the ligament is not handled correctly, it can lead to further damage as a result of instability in the ligament area. For example, arthrosis (joint disease), misalignment, permanent pain and limited movement can result.

If skier's thumb is suspected, a doctor will ask questions about any accidents which may have occurred recently, about your medical history, and about the location and type of pain. The so-called "folding test" will then be carried out, which shows whether the collateral ligaments are intact. This is done by seeing how far the injured thumb can bend (or "fold") in comparison to a healthy thumb.

Lastly, an X-ray is taken in order to show how severe the injury is and whether there are any breaks or ruptures to the bone. Subsequent treatment will depend on the above findings.

Then follows the immobilisation of the base joint in the thumb, in which the thumb is kept in place for a period of three to six weeks using a thumb splint. After this period, hand therapy (or rather, physiotherapy in the hand) takes place in order to gradually get the thumb moving again.

If the patient experiences severe pain and swelling, anti-inflammatory drugs can be used.

In the event of a serious degree of injury (such as ligament rupture, avulsion fracture, or ligament ends not being next to each other), surgery is required. Surgery consists of sewing the torn capsular ligament structure together or replacing the collateral ligament with one of the body's own tendons, whereas avulsion fractures are re-anchored using a screw. Surgery should take place as soon as possible in order to stabilise the thumb again.

After the surgery, it is necessary to keep the base joint in the thumb still for several weeks using a cast or thumb splint, with physiotherapy to follow.

If you have previously suffered from skier's thumb or have generally weak ligaments resulting in excessive flexibility in the joint, the thumb should be stabilised as a precaution against strain. This can be done using tape or a light orthopedic support, for example. Both of these options will protect the base joint in the thumb from being overstretched without limiting movement in the hand.

The following products can prevent injury or provide relief: 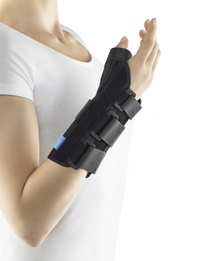